Note: names and locations have been changed to protect the innocence and dignity of some individuals 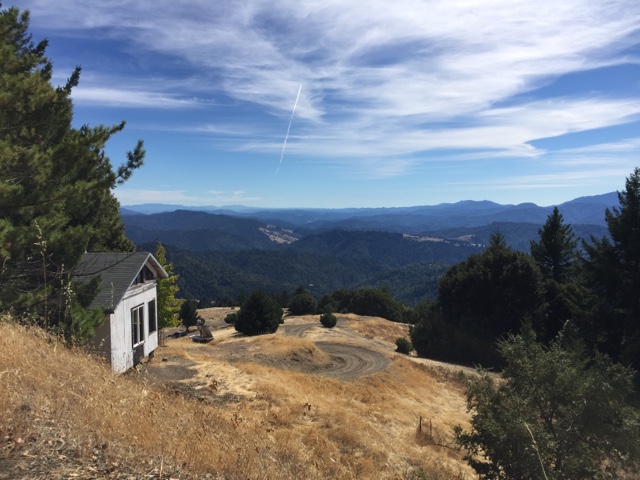 The road to Dunkin felt like a road I shouldn't be on.  Not like it was busy or dangerous, it was quite the opposite, nearly deserted.  I rode through some nice redwood groves on the opposite side of Wiggly Worm River for a while until the road started to slope up.  For 12 miles I climbed upward, winding up switchbacks on the neglected road that carried me past many dirt roads stemming off the main vein, either leading to intense inclines or declines far into the pines where I'm sure people are doing things they don't want other people to know about, hence the "No Trespassing" signs and my feeling of being where I shouldn't be.  But I pedaled on, I was meeting Jim at 3:00 and I didn't want to make him wait for me.  After riding up for 12 miles, the next 8 were all downhill.  However, the road was so rough and curvy I had to ride my brakes the entire way into town.  "Town" is a loose term.  The road spat me out in front of a market with a gas station with at least a dozen hippies smoking spliffs and cigarettes, probably looking for work or waiting on a ride to the next farm or just smoking spliffs and cigarettes.  I sat on the bench, away from all the hippies and waited for Jim. 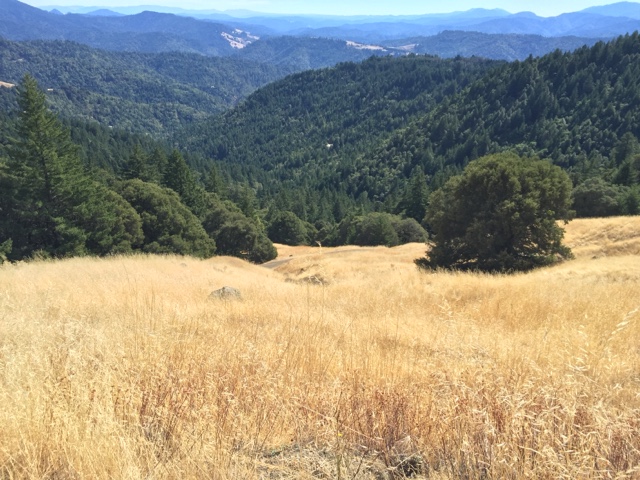 I'm glad I was early because so was he.  We broke down my bike, loaded the car he borrowed to come and get me and headed into the hills.  I would not have made it up the next road on my bike, it was steep and rugged, and steep, insanely steep.  At the top there was one of those roads that lead into the abyss of pine trees and this is where we were going.  Bryan met us at the top of the hill with the quad.  I rode my bike, trying to keep  up while him and Jim sped along to the farm.  We passed through a couple gates on our way.  I got the top of the hill tour, the good places to pitch a tent, Jim and Wilson's cars equipped with tarp overhead, the outdoor kitchen consisting of a double burner and a mini grill, a few coolers, a few storage bins for dry food, a fire pit, and a sink with a shower head for the spigot. 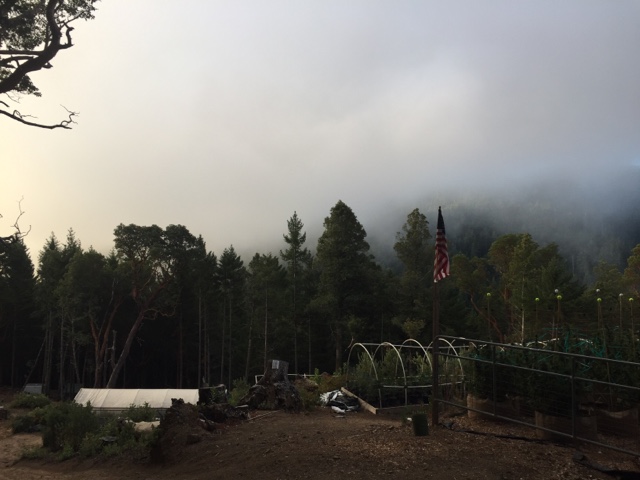 And just before the road continues down the steep hill to the rest of the farm was the trim room, a large, maybe 12' by 12' army tent filled with Delilah, Armando, Elfinah, Tish, Arnie, and Tequila.  There was a small patch of weed plants next to the tent, the tip of the iceberg.  Hundreds of other plants were scattered about at different sites along the windy road but, I didn't see these until later.  We got to trimming.  Jim was my teacher.  He showed me how to clear the leaves away to reveal the beautiful, hairy buds that we're all so accustomed to smoking.  It was easy to know what the finished product should look like, I've seen enough weed in it's final form.  It was a struggle to acquire the finesse to trim quickly and efficiently, I kept wanting to double check my work and make sure I got every leaf; Jim and Wilson call this competing in the prettiest nug contest, they don't have to be perfect they reassured me. 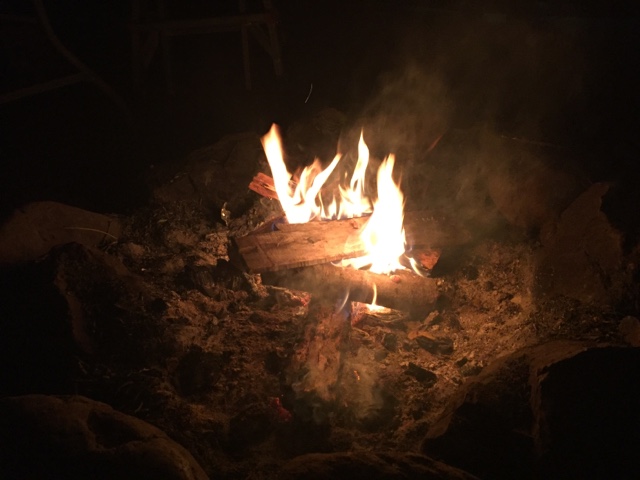 It took me a couple days to get a good pace going.  In those couple days it seemed like everyone left but me, Jim, Wilson and Tequila and it was like that almost up until I left over a week later.  Trim room conversations are in their own category when it comes to socially acceptable discussions.  The afternoon I got there, Tequila was telling the tale of when she broke an ex-boyfriend's dick during sex.  Half the room was in stitches as she was telling it.  The other half didn't understand all the details because half the room spoke Spanish as their native language.  Luckily, Tequila was able to translate for them.  I feel like I've known Wilson for a year now but, I met him for the first time up on the hill.  Him and Jim met up a little over a year ago, I don't remember where or when but, it seems like they've been living out of Wilson's car, rock climbing, and trimming pot together ever since.   I'm stoked I finally got to meet him.  So it was the four of us trimming for a couple days on Lieutenant Dan's Farm.  When you sit in a small room with the same people for 12-15 hours a day, you really get to know each other.  I'm not talking about the usual, "Where are you from, blah, blah, blah….."  We talked a lot about shitting. 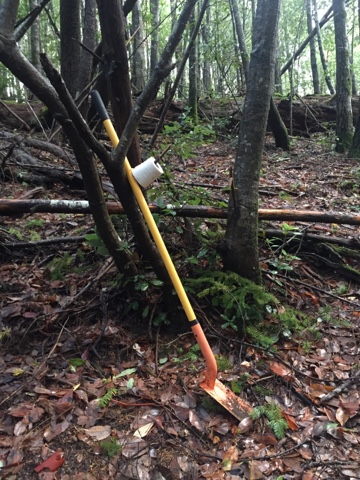 There's no toilet up on the hill, just a nice shovel to dig a hole and a roll of TP.  I nearly died laughing when Tequila said, "When I go to take a shit, I'm terrified I'm going to dig up someone else's shit."  It's a genuine concern.  Jimmy and Wilson have been up on the hill for over 30 days, that's over 60 holes with 60 shits, the probability of digging up shit just gets higher and higher.  That's not all we talked about though, we're not savages.  Lots of times we all just shot the shit with music playing in the background.  But other times, we all sat quietly, listening to educational podcasts, story-tellers, even local radio programs that broadcast political and world news.  Sitting and listening to people speak is something that calls back to the 50's, pre-TV. 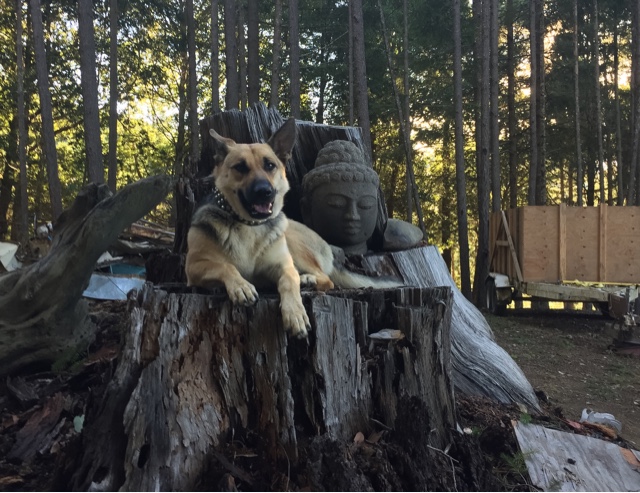 How nice it is to listen, not get sucked into a screen, just carry on with work while a voice attempts to shed some light on something you never even thought about.  As much as I've enjoyed living under a rock my whole life in terms of world news and politics, it felt so good to listen in on Democracy Now, the news source broadcasted over the airwaves right in Humboldt County.  It's also funny to hear the commercials and the sponsors, all stores dedicated to pot growing.  It's ironic to think I lived on a hill for 10 days, completely out of cell phone range, and I felt more plugged into the world than I ever have before.  The threat of weather was present from the start of my time on the hill.  I don't know what day I got there, when it started to rain or how long it rained for but fuck, did it rain.  It blew, too, the wind, that is.  The whole storm experience while living outdoors was one for the books. 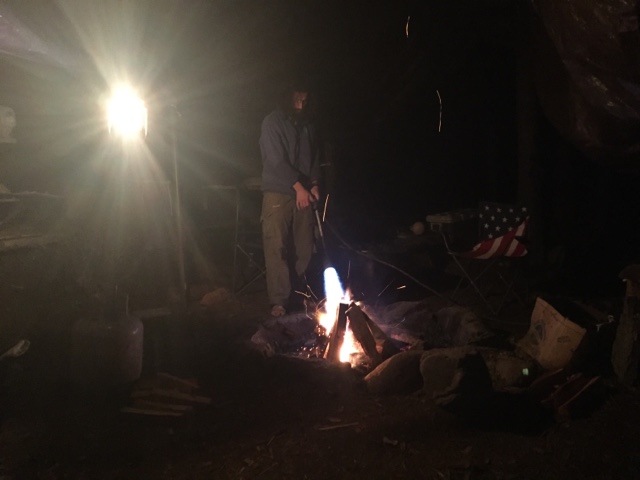 We all added some extra tarps to our tents, an added barrier against the elements.  Luckily, day two of the storm was a bit of a lull, we needed it.  None of us did an amazing job tarping our tents so most of us were drying all our stuff above the mini propane heater in the trim room.  I used to hate the idea of getting into my tent all wet, getting water on my sleeping bag and pad, waking up damp.  But why?  I asked myself.  There's always time to dry things, always a way to reset before things get worse.  For most of us anyways.  Just before the storm hit us, Hurricane Matthew ravaged Haiti, killing hundreds, leaving survivors with no food or water.  Our situation on the hill did not seem so bad in comparison, even when the tarps in our outdoor kitchen collapsed, caught the wind like kites and melted into puddles where we found them the next morning.  Life goes on.  With all the added water, trim camp became swim camp and we welcomed it, even taking shits outside in the wind and rain.  Before the storm actually hit, Wilson took his phone out to the tree up the road, the only place on the hill with cell service, and downloaded the three part audio book, The Golden Compass. 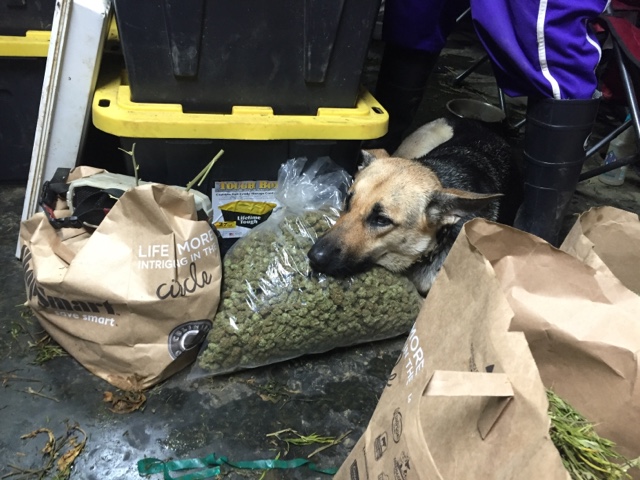 Although it was written for kids, maybe preteens, we enjoyed every minute of escaping into this other world while the rain hammered down on the soft, trim tent roof.  We laughed as we picked out parts that might allude to something more "adult" than the average 12 year old picks up on.  There were days when we listened to nothing else for 10 hours, just immersed ourselves in the story that bloomed in all our hazy heads, forgetting what world we're in.  There was one night after dinner, the rain ended earlier in the day and the sky was clear for the first time in five days.  The moon had not risen yet.  I walked past the trim room where light was pouring from the rectangular windows, I walked to the edge of the hill and looked up at the stars.  I could smell the subtle skunkiness of the pot plants in front of me, heavy with water from the rain, bowing down from the weight, full of the magic that is released when dried and smoked, magic like the clear view of the stars above, the faint streak of the milky way spanning the entire slice of open sky above from the tops of the mountains in front of me to the tips of the trees behind my head.  I thought time was tough to keep track of on a bike tour but, nothing will compare to the loss of time on the hill.  The 10 days I spent there could've been 72 hours or a whole month.  The sun eventually came back out and we worked a couple days in the sunshine before I packed up my tent and got a ride off the hill. 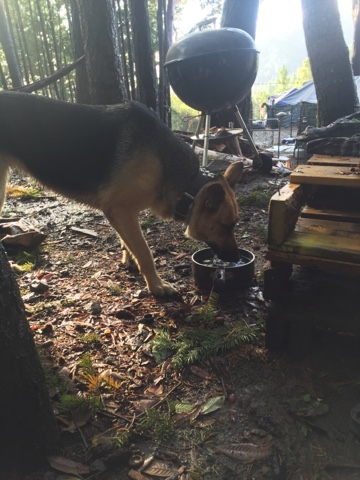 Tequila needed a ride down to the next town so Jimmy and Wilson took the day off as well and the four of us re-entered civilization.  I did not smoke that morning but, I never felt so stoned and confused buying groceries in the store with dozens of other people around me.  It's amazing how different living situations, time and sensory deprivation show us how malleable the mind is, how loose and fluid reality actually is.  We're all in different glass containers thinking we're seeing the world and life through a clear and unaltered lens.  The truth is, we're all delusional, from the folks in cubicles on Wall Street to the dirty hippies shitting in holes, smoking spliffs and living up on a damn hill.
Posted by Dan Brenton at 10:49 AM