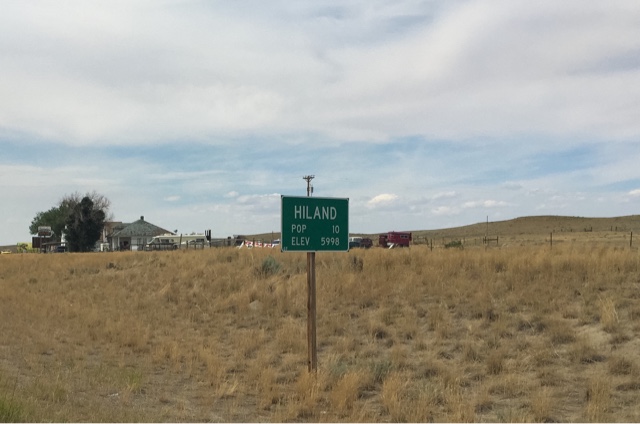 If there's a competition for most desolate state, Wyoming is the frontrunner so far.  At least with the corn fields in Iowa, there's evidence of human presence.  But with Wyoming, the barren fields of grassland are just that: barren.  I was aiming for Powder River today but, when I got there, I didn't see any businesses that weren't boarded up to fill up my water. 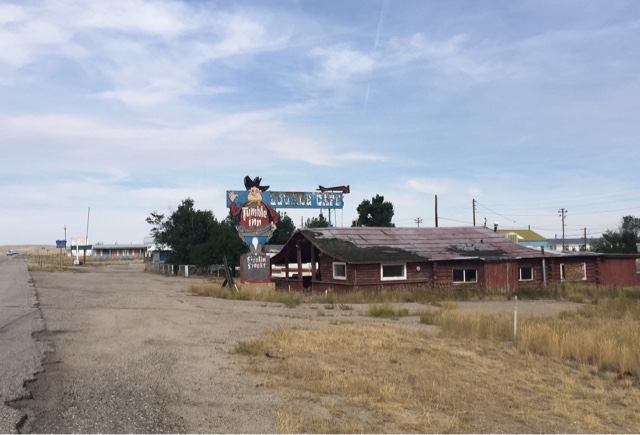 So I kept riding.  The only reason I moved on is because Jon, the guy I stayed with in Casper, told me about Hiland just 20 miles past Powder River.  I had no idea it was there, the name doesn't even show up on Google Maps.  But sure enough, it's real.  At the top of a hill I could see a small cluster of campers, old cars and a couple ranch-style homes in no particular arrangement to suggest a town.  At the bottom of the hill I saw the sign: Hiland Pop 10.  10 people live here.  Jon told me there's a bar here where I could get water, so I kept riding until I saw it.  The Bright Spot, I guess in this town it is. 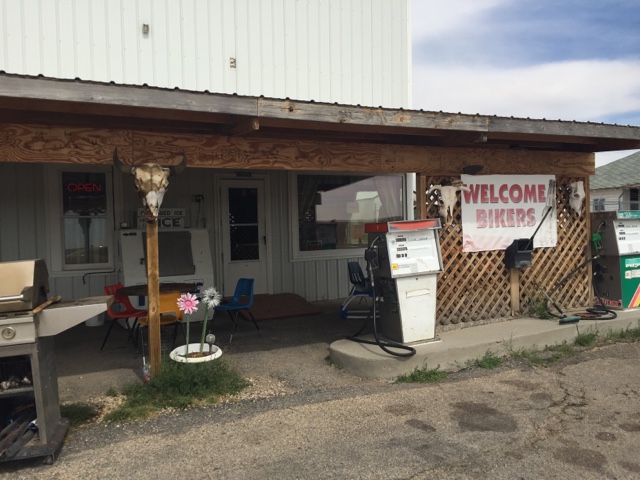 Cow skulls hang on the patio posts, picnic tables and mismatched chairs rest in the ahade with no one in them.  It smells like cigarettes inside, each table in the lounge/pool hall/convenience store is ornamented with an ashtray for a center piece.  Through a small door behind the counter is the bar looking like something I could only imagine in a movie about the underbelly of American life. 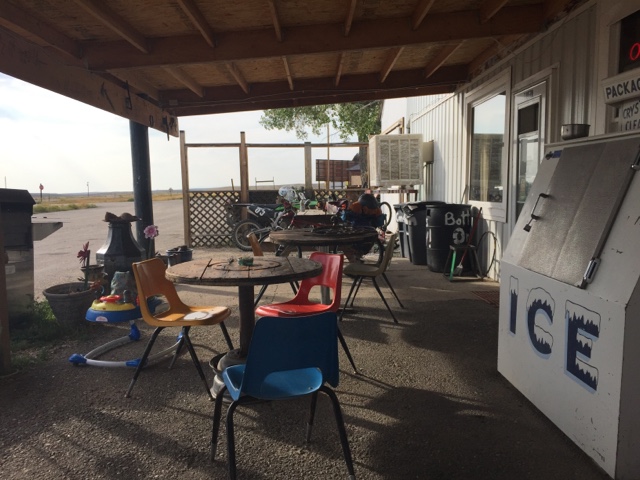 One wall is covered in photos of hunters holding up the bodies of dead animals, rhinos to grizzly bears and a whole slew of antlered creatures; another wall littered with business cards and stickers with fun sayings like, "Meat is not murder!  It's a tasty way to enjoy a dead animal"..."Drill Earth first, we'll drill the other planets later"..."If Obama's the answer, how stupid was the question?" and "Welcome to Wyoming, frankly I don't give a fuck how you did it back home."  And every empty space is filled with dollar bills; some with just a name and a date, others with handwritten sayings like, "Trump 2016" or "Fuck it". 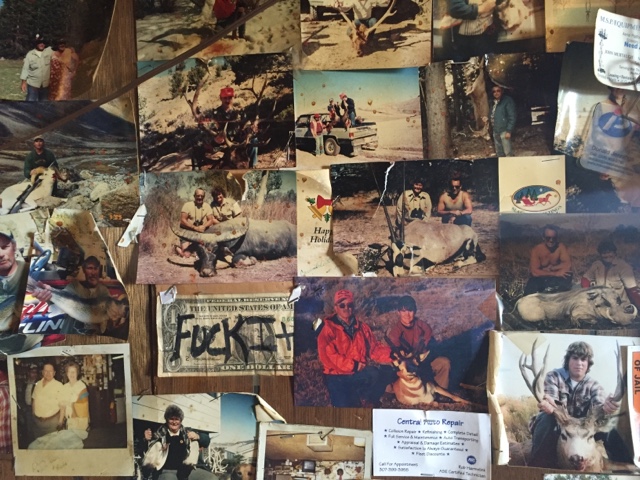 The TV in the corner is playing The Patriot and the bikers that wandered in are providing their own commentary in between reading aloud the offensive stickers that strike them as funny.  In the lounge/pool hall/convenience store, a French family is hanging around, children and all, probably taking this all in as a genuine impression of America that they'll go home and tell their friends about. 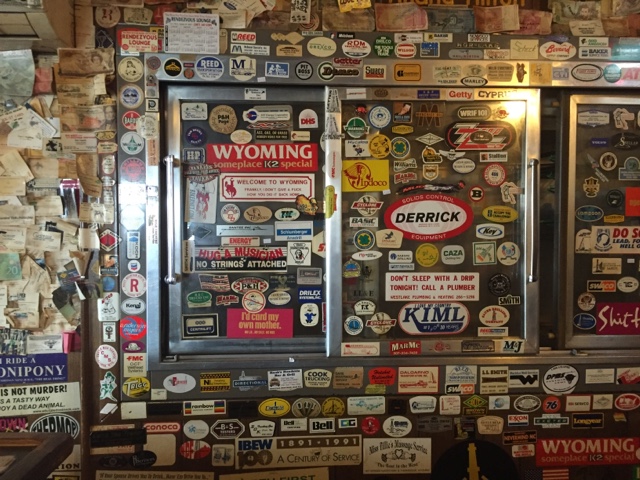 They even wrote on a dollar and stapled it to the ceiling – there's probably more money on the walls than this place is worth.  I pinned up my own dollar as well when asked by the bartender if I wanted to.  What the Hell, you know?  Everyone is gone now, no more bikers or French folk, even the bartender is barely present and The Patriot just started from the beginning on TV.  How would I describe America after seeing all these small, desolate towns in these middle states I've never seen before? 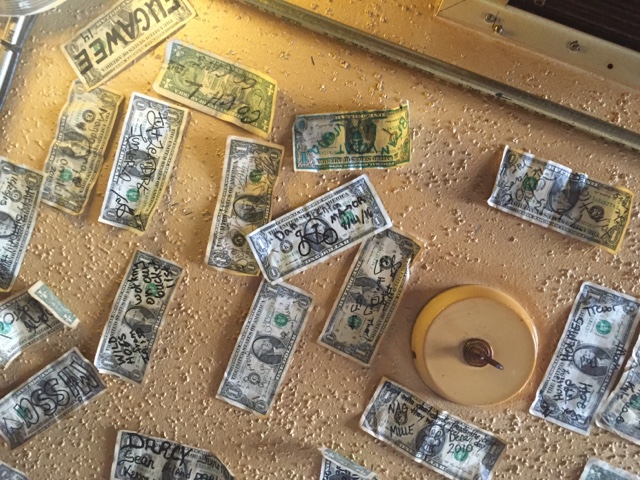 Is ecclectic an appropriate answer or is that too broad? Where else has hat French family been?  They were all wearing cowboy boots and straw hats.  Is The Bright Spot what they were looking for?  What they expected to find?  This country is truly so big and the big cities are such a small percentage of what makes up this massive land.  I'm at a loss trying to put my finger on what this country is all about. 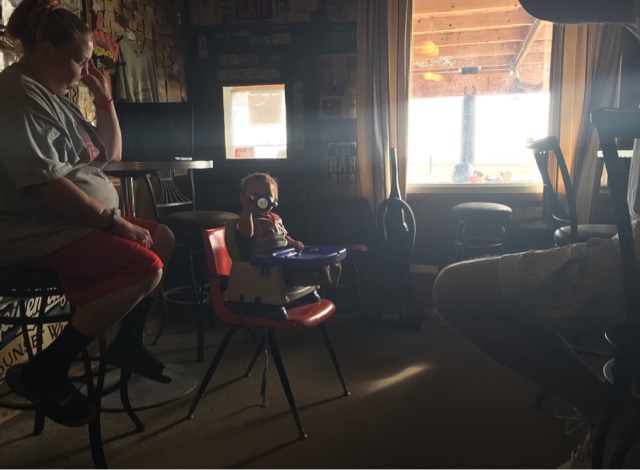 Maybe I'm just distracted by The Patriot on TV or maybe I just keep finding better and better stickers on the wall.  Here's one that says, "Dip me in honey and throw me to the lesbians!" right above a confederate flag sticker.
Posted by Dan Brenton at 10:53 AM