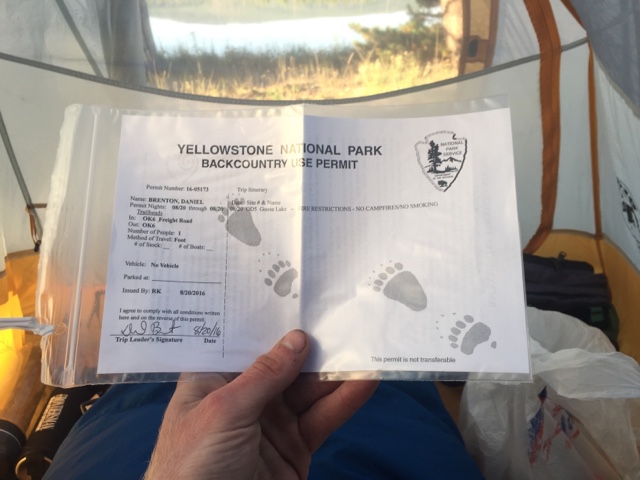 I don't always find time to write at the end of each day, some things take higher priority like, eating and sleeping.  So here I am in my tent, another chilly morning in Yellowstone on the edge of Goose Lake in what's considered the 'backcountry'.  A wrong turn brought me to this situation. 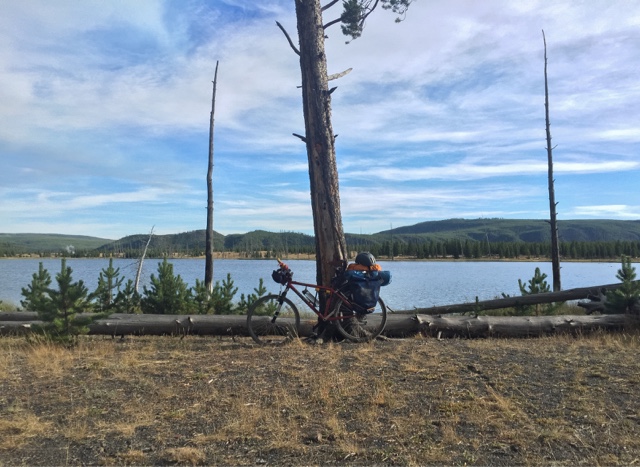 I was aiming for a short ride along Yellowstone Lake to a campground over there but, I wasn't paying attention where the road split and ended up miles in the wrong direction before I realized.  So I ended up at Old Faithful, the biggest draw for tourism in this park; there was a whole complex of hotels and restaurants and gift shops just in this one area.  Yellowstone is probably the most visited national park and this is the hub of it all.  Get me out. 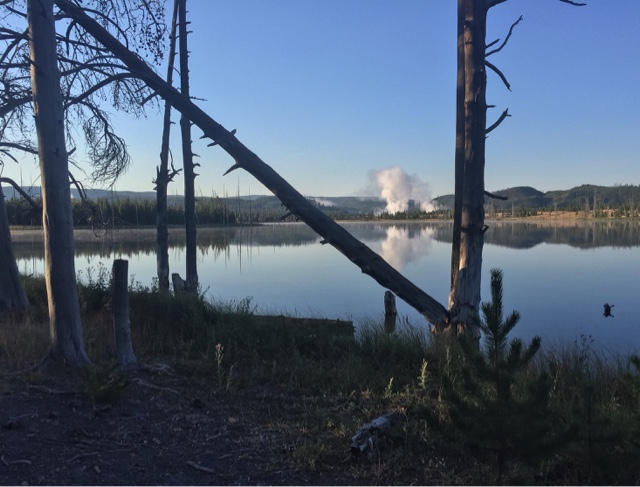 But the closest campground was about 20 miles away, something I didn't want to attempt at 5:00pm when it would start to get real cold by the time I got there.  So, talking to the ranger at the nearest station trying to find out if there's any other options, I learn there is, and I also learn there's a forest fire going on up near the campground that's 20 miles away. 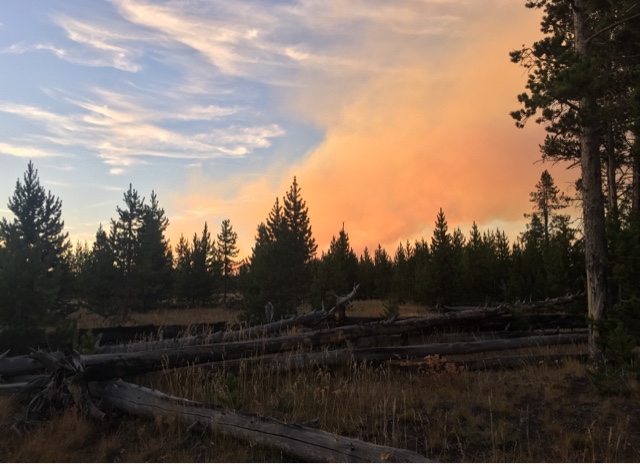 He didn't seem too phased about it, he was trying pretty hard to convince his coworker to go out for drinks with him.  He said I shouldn't worry about the fire, 'the winds are blowing North and won't affect you,' said the ranger that looked like Jack Frost from one of those stop-motion Christmas movies from the 60's with his long white hair and soul patch beneath his lip.  Since I didn't want to ride the 20 miles, he told me of a backcountry site only 8 miles away. 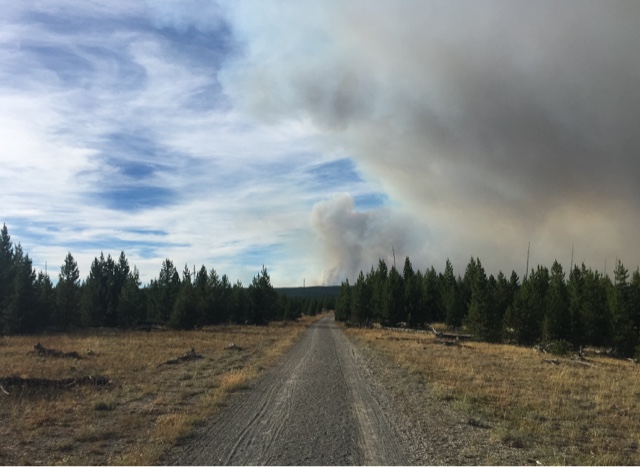 So he quickly filled out the permit for me, sent me on my way and went back to trying to get this girl to go out on a date, briefly mentioning I'd have to hang my food up to keep it away from bears.  So I headed off to flaming bear country and got here around 6:30, just in time to set up camp, eat, purift some water from the lake, dig some holes to shit in and hang my food before the temperature dropped too low. 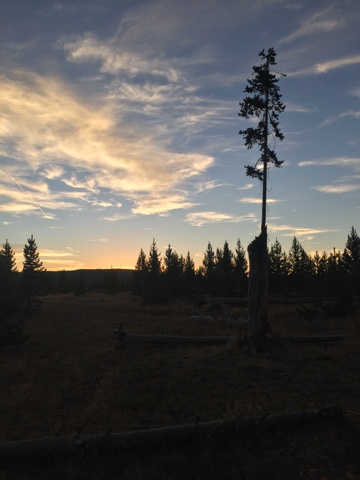 I couldn't be more thankful for making that wrong turn.  Everywhere I've gone in this park so far is filled with people, whether on the road or at the campsites or at any of the overlooks along the park, you just can't get away from people; except in the backcountry.  It's just me here, this whole lake to myself, all the colors and smells and sounds are just for me; the rich scent of pine mixed with the distant fire, 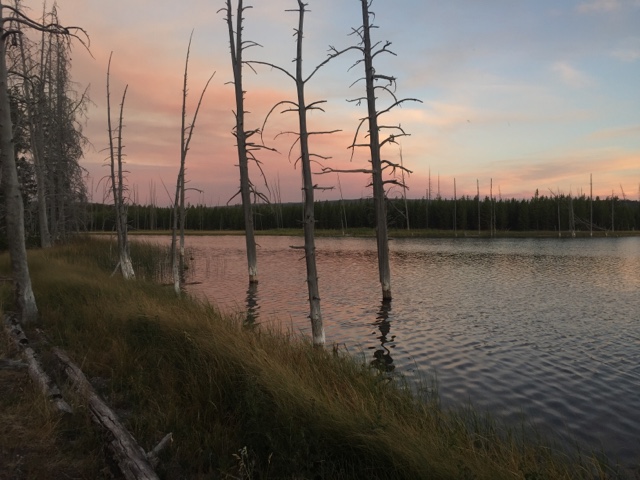 the rose quartz clouds slowly fading and the earth turning dark green and ochre, whatever birds making whatever kind of noises they make and the wolves out in the distance howling for the moon.  You don't get this in a campground with 80 something sites with water and electric hookups.  You don't get the sense that you're out in nature there. 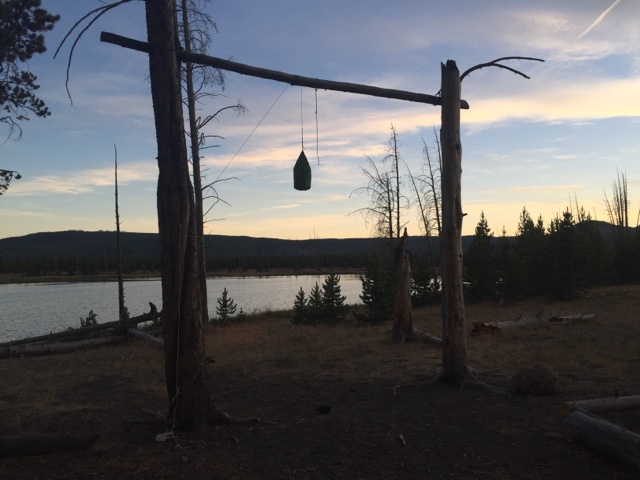 Not like this.  Before last night I felt like I didn't get to see a lot of Yellowstone; the view from the main road doesn't reveal all the spectacular views you want, I think you need to take to the trails for that, something I just didn't have the time or energy to do.  But camping on this lake all to myself gave me a great intimate viewing of the land so beautiful it became the first National Park.
Posted by Dan Brenton at 2:59 PM